King Harold wrote:What would happen if you tried to name something "macro"?

For the second half of that statement, here's a real example:

Labels now have types associated with them, which gives them a size and so means that you can use an index (inside []) to access element addresses individually.

You can define new structures at runtime with .struct:

This is so totally insane... I love it!

Is this really necessary? Can't it "detect" what it is you want? Because usually you'll want the macro style replace with something textual (label, string) and the value with something numeric or a known variable.

Timendus wrote:Is this really necessary? Can't it "detect" what it is you want? Because usually you'll want the macro style replace with something textual (label, string) and the value with something numeric or a known variable.

I don't really like attempting to guess what the user wants. Take the factorial example;

In that instance you'd really want val to be evaluated and passed as the number "10", even though you're passing in a label. Of course you could force it with f(val+0), but then things start getting messy.

I agree that if you pass a string constant ("") it should default to passing-by-macro, so good idea.

I'm trying to make it as flexible as possible before a release so that people can write useful extra directives and functions for the assembler. The examples are designed to be very silly and over the top to stress-test the parser and preprocessor.

Edit: I should also mention that thus far I haven't implemented the old Brass-style macros (eg .define ld_a({0}) xor a). I don't know how useful they would be, maybe something for the "legacy" plugin collection I'm arranging (see also: .equ).
Top

Hm, next "problem" I need some community guidance on.

The output as generated by the compiler is a large array of OutputData structure, which contains the page number, program counter and array of bytes output at that address (array of bytes thanks to output modifiers - unsquished programs have two bytes of output data per byte written by the compiler).

Now, currently, I sort by page then by program counter then write sequentially, which is clearly "wrong" (think of .relocated blocks).

Bear in mind that "holes" in the source code (ie, non-consecutive output addresses) can be present; in a raw file they'd be ignored, in a hex file each data record has an address anyway (so that's OK). Maybe I need a "padded raw" output writer that pads the data so it sits neatly on pages, and have a page definition directive?

I fixed the parser so indexers and field accessors work properly, so "ld a,(Var[2].Plane[3].Normal.X)" now compiles if you wanted something like that. I also fixed right-associative operators (order of precence is from right-to-left, rather than left-to-right, like x = y = 1).
Top

Sounds like it should work, but I'm not really up to speed with all that... So don't take my advice

I created a rawpages plugin that outputs the defined pages in their index order, writing X bytes per page where X is the defined size of the page.

As an example, Sega recommend the following SMS memory map for megabit cartridges. There are three "windows" that can be swapped in of 16KB each; they recommend that you use a fixed 32KB in the lower two windows and vary the third window's 16KB page (the final 16KB memory is mapped to RAM).

So, in Brass code;

(KB is a silly function that returns 1024xvalue).

I'm making some parts of the core plugin collection extendable; for example, the SMS requires certain data to be written into the ROM (checksum, TMR SEGA header and so on) as well as SDSC tags (author, description and so on). Thus, a "smsrom" plugin writes the stuff then can hijack the "rawpages" plugin to perform the actual writing to disk.
Top

The help viewer can now export all of the documentation into a single website (including a contents frame). I'll make it zip up the output files so that it can be easily distributed/downloaded.

I've uploaded a copy here if you want to observe some of the documentation as it grows.

To take advantage of the better page support, each page is output as a different program variable.

I have also promoted ":" to an operator in its own right (eg :y is seen as ":" and "y" rather than ":y") which makes macro replacement much easier.
Top

Why does that look so much better than my documentation?

anyway, wouldn't it it better to make an .endpage directive?


benryves wrote:I have also promoted ":" to an operator in its own right (eg :y is seen as ":" and "y" rather than ":y") which makes macro replacement much easier.

What happens when u use .page n when you haven't yet defined that page?

And just to be sure, what output does this generate:

EDIT:
is this valid?


anyway, wouldn't it it better to make an .endpage directive?

I'm not sure what advantage that would have..?


What happens when u use .page n when you haven't yet defined that page?

The page number will be set (:$ = <page>) and the output and program counters will be set to zero.

As for what will be output, it depends on the output writer. The raw writer will just spit out a binary of all pages, Intel HEX will also emit a correct object file, but the rawpages directive requires that all pages be defined so it knows how to format each page. In the case of undefined pages it displays a warning that it found data on page X, but page X wasn't defined so it doesn't appear in the output.


And just to be sure, what output does this generate:


EDIT:
is this valid?

The logic is that the current module name is appended to all newly created labels (so, on the line y=255 it sees "y, hmm, don't know what that is, so I'll create a new label called "x.y").

As for label resolution, the compiler starts by searching the current module for a match; if none is found it moves up a module and searches again, moving up until it reaches the "global" label scope.


Timendus wrote:Why does that look so much better than my documentation?

The silly parser in Brass 1 would strip out all whitespace first of arguments (unless it was detected inside a string) and work on that.

A side-effect of that was that the following source would assemble:

This could actually be quite useful in some instances where you, say, wanted to pass a register pair to a function like this:

Brass 3 has a much stricter (and more complex) parser, so the above simply wouldn't work. This results in a missing feature, which we can't have..!

I'm trying to avoid writing parser hacks. Another parser hack in Brass 1 was the replacement of [%var%] with the environment variable "var". As a compatibility hack I wrote a plugin that registers a bunch of macros to replace "[%var%]" with the contents of var (as [%var%] is five tokens - [, %, var, %, and ] - I can only replace the single token "[%var%]") but this doesn't help in the situations where you need to pass in a numeric value. To get around this I cobbled together an eval() function that evaluates whatever is in the argument and returns a numeric value. Thus;

How does this help with the above regh/regl feature? Well, why not beat around the bush and make labels capable of handling string values or numbers? Proper string handling helps in a lot of places, after all. Thus;

Some of the operators have been modified to change their behaviour if either of the arguments are passed as strings. + or & will concatenate strings if either operand is a string (as will their assignment versions += and &=); = assigns strings; ==/!=/>/>=/</<= compare string values. If either value is passed as a string then the string operator takes over; you can force conversion to a number by multiplying by 1 (returns the current encoding version) or by using eval() (parses as a number). Thus;

To complement the new string support are a bunch of string manipulation functions.

I've also thrown together some Brass 1 compatible directives - from the simple .asc (just registers a macro that replaces .asc with .db) to a string encoder that mimics the behaviour of .asciimap.

Latenite 1 compatibility is going to be fairly important. Brass 3 is quite different, but has been developed in such a way that for the most part it will integrate with Latenite 1 as well as Brass 1 currently does.

The current compilation process is to set a bunch of environment variables then invoke a compile command file (.cmd), which in turn runs Brass with a shedload of command-line arguments.

Brass 3 just takes one command-line argument - a project filename. Thus, the workaround is to do this;

In brief; all you will hopefully have to do to get Brass 3 support in Latenite 1 is to copy a few files over and delete the old Brass.exe. 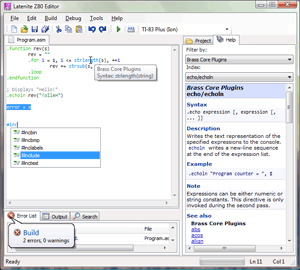 Timendus wrote:Why does that look so much better than my documentation?

The HTML/CSS really is a mess.. So I just copied some of the colors and a bit of css here and there, tried to make it look professional but not an exact copy. I'm not sure about the extendable tree. It's not necessary for now, and probably not worth my time to redo that at the moment. So maybe later.

It should have syntax highlighting though. Any ideas on how we could do that with XSL..?

(Sorry for spamming in your topic, by the way

Latenite 1 compatibility is just a temporary hack, ultimately I'd like to build a .NET-based IDE (Latenite 1 uses a lot of Win32 code). Hopefully Mono's WinForms will be up to the task.

That is weird... I'll look into it. Hadn't tested in Opera yet.
(Actually, I've only got Firefox here and I'm too lazy to install anything else when I've got my Grande Browser Compatibility Testsuite all set up at home


Latenite 1 compatibility is just a temporary hack, ultimately I'd like to build a .NET-based IDE (Latenite 1 uses a lot of Win32 code). Hopefully Mono's WinForms will be up to the task.

Can't want to transparently wobble Latenite in my Beryl/Compiz!