Here you can find side projects of the staff and great projects which we think should get extra support. (Note that featured projects are not projects by staff members of MaxCoderz)

I jumped on the emulator bandwagon and wrote my own one:

Why not join the development of TilEm instead? Well, this one started out as a pure Z80 emulator that I wrote for fun. It's much more accurate than most available, including an almost 100% reproduction of the behaviour of undocumented flags and also mirrored instructions. It's also fairly fast, I may say. Unfortunately it can't be fit to work with TilEm (mainly due to the way it accesses memory), so the next idea was to add the TI-83 I/O, since it's no effort compared to the CPU emulation. I also created a new Toshiba LCD emulation with Z-index and nice greyscale support (i. e. it doesn't do any tricks, the grey levels just emerge). All in all, it is a good learning exercise for me.

As for the 83 part, I think it does a better approximation of the real hardware than other programs I saw (judging by the source), including port mirrors. I still need more information to make it 100% though...

It's for windows only at the moment, but unix zealots shouldn't worry either, because all the platform dependent GUI code is in a separate file that's completely replaceable. I don't like cross-platform APIs but coded it in raw win32, so the resulting code is quite friendly on resources.

It runs Acelgoyobis at 92% speed on my old P133. It also runs the calc version of Desolate, although it's very slow... The grey flickering is more visible if you magnify the window.
The Independent Z80 Assembly Guide
Acelgoyobis
PindurTI
Top

there are so many buttons to remembert

Also of course, a friendly GUI for sending files etc... maybe even a file explorer which is open all the time to send stuff to your calc

May I ask what the name means?

'Pindur' is just a colloquial word for 'tiny'.

Eye-candy GUI is at the bottom of my priority list. Linking ability is probably the most important thing, since it's practically useless without VTI at the moment (well, you can program in BASIC, but that's not what I'd need an emulator for).
The Independent Z80 Assembly Guide
Acelgoyobis
PindurTI
Top 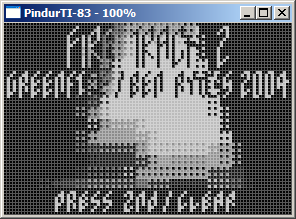 Very, VERY cool. Using the same key layout as VTI would be useful, though... Shift for 2nd is confusing me.

Yeah, can this one emulate the archive? That always bothered me about VTI.
bananas... o.o
Top

Since TI-83s don't have archives, it can't. But I'd say it's early to declare the development closed at this point.

I'd like to add support for the 82s and the pluses as well. I think my LCD simulation looks nicer and more realistic than that of VTI, and it has higher framerate, and there are some programs I'd like to look at in their full glory.

yeah the grayscale looks cool. There is even those space between the lcd pixels. What would make it perfect is if it could emulate the blue lines/screen of death

The Revolution is here...
Top

It's not really useful in its present state, but at least it has the potential...
The Independent Z80 Assembly Guide
Acelgoyobis
PindurTI
Top

Love the contrast control, and those nice little spaces between pixels. Very cool.

The only thing I've found is while this emulator has a slower time for the pixels to change state than VTI, it doesn't correctly emulate flicker artifacts with some grayscale programs. I can see some kind of grayscale shade change swimming up the screen when I test my DW2 demo on real hardware, VTI also emulates it. This emulator just gives perfect grayscale.
You know your hexadecimal output routine is broken when it displays the character 'G'.
Top

But with all that aside, I think CoBB did a great job.

The LCD emulation can be tuned, e. g. pixel colour momentum or contrast weight. The horizontal-vertical lightening effect coming from the wiring is not emulated, although I don't think it would be hard to add.
The Independent Z80 Assembly Guide
Acelgoyobis
PindurTI
Top

CoBB wrote:The LCD emulation can be tuned, e. g. pixel colour momentum or contrast weight. The horizontal-vertical lightening effect coming from the wiring is not emulated, although I don't think it would be hard to add.

will it emulate the blueish pixel overload, when going into test mode?